Behind the Scenes product design

Why Your Produce Rots and How We’re Fixing That

We’ve all been there: walking away from a store with rock-hard avocados—that everyone has touched and squeezed in hopes of finding a ripe one—disappointed you’ll have to wait a few days before you can make that guacamole you’ve been craving. And then we do this strange thing: we stick our avocados next to bananas so they ripen faster. But, why? What makes avocados ripen faster when they’re next to bananas? The answer: ethylene gas. (Cue the Bill Nye the Science Guy theme song.)

Bananas, and other fruits and vegetables, all give off ethylene gas, which speeds up the ripening process. Over time, ethylene gas causes our fruits and veggies to over-ripen and go bad, leaving us with way-too-mushy avocados, yellow broccoli, and shriveled grapes, which is extra annoying when you just bought all that great, fresh produce and are trying to eat healthier. (Aren’t we always making grand plans to eat healthier?)

It doesn’t help that we’re typically storing produce incorrectly. Just throwing it in the fridge in the plastic bag it came in from the store won’t cut it. You’re going to get some unhappy produce from all that moisture build-up.

How GreenSaver Rescues Your Produce

Americans are spending a lot on fresh fruits and vegetables—like over $8 billion on each according to the USDA(Opens in a new window)—but 25% of what we buy is thrown away because of three reasons: over-ripening, rotting, and wilting. We designed GreenSaver(Opens in a new window) to directly address these three key problems.

It took the OXO team hundreds of trips to the grocery store and hundreds of pounds of rotting produce to develop this product. It even led the product team to buy their own refrigerator just to keep their (smelly) product-testing separate from the office fridge.

After studying how broccoli, strawberries, lettuce, avocados, onions, lemons (and the list goes on) rot, the team worked to create a produce storage container that: 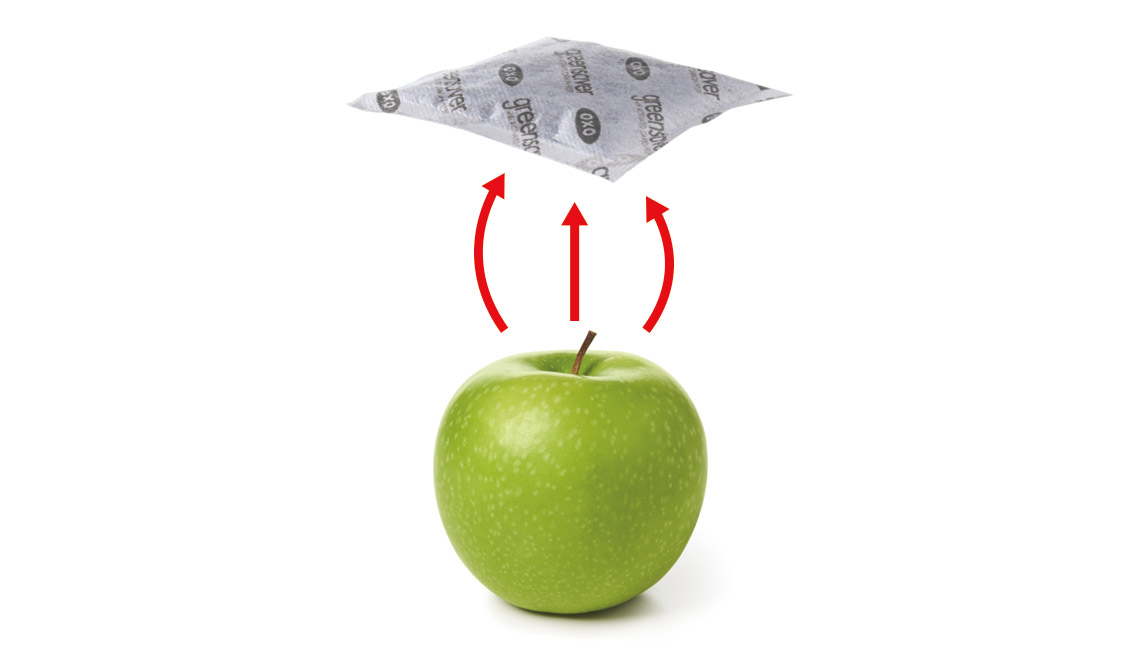 Apple gives off ethylene gas and filter absorbs it.

GreenSaver was designed to hold a filter that traps and absorbs ethylene gas - that stuff bananas give off that helps speed up the ripening process for avocados. The filters are filled with nooks and crannies that trap the ethylene gas and help slow down the rotting process, so you can buy a bunch of produce without having to rush to use it all up.

Early design of the basket.

We also wanted to design a produce storage container that gives exactly the right amount of ventilation for produce so all your fruits and vegetables can breathe in there. Think about storing mushrooms—we’ve all heard about keeping them in a paper bag, but why? (Cue the Bill Nye the Science Guy theme song, again.) The paper bag, rather than a sealed plastic container, allows for proper air circulation to keep those mushrooms from going brown and becoming slimy (yuck!). GreenSaver acts in a similar way with the elevated basket; it allows for air to flow all around the produce and stops moisture from collecting on your produce.

GreenSaver’s basket also ensures that no produce touches the walls of the storage container, so no gross things (like liquefying spinach, ew) happen in there. The basket’s corners and sides are also smooth to help prevent any bruising of the produce. The more cuts and bruises, the faster rotting, wilting, and mushing happens, and the faster I consider becoming a carnivore.

Early CAD model of the basket.

Lastly, we wanted to tackle wilting. That feeling of buying a bunch of lettuce or kale and finding out it’s already wilted when you go to use it is really the pits, so we designed a ventilated lid to control the humidity level for different types of produce. The lid opens and closes, so for produce like green beans, carrots, broccoli, spinach, and other leafy greens that need higher humidity, the vent can be closed. Produce like avocados, apples, lemons, peaches, peppers, and other hardy fruits and vegetables need lower humidity, so the vent can stay open.

But don’t worry, you don’t need to remember any of that. We added in a handy chart on the underside of the lid to show you what produce requires what kind of air flow. (Yeah, we’re thoughtful like that.)

Throughout the design process, we tested (and ate!) all kinds of fruits and vegetables. Our system is pretty awesome, but there are a few things to make it work even better. Along the way, we picked up some tips that ensured the freshest produce for us:

- Dry that produce before storing it! Produce that’s sitting in water can rot, wilt, and accumulate icky juices easily. It’s best to minimize the amount of water that sits on the delicate leaves of your greens.

- No cutting! It’s best to hold off on cutting the produce until you’re ready to eat it (unless you have to cut it so the produce fits in your GreenSaver). Any cuts cause damage and speed up the ripening process.
Now, GreenSaver might not solve the hard avocado problem we’re all dealing with, but at least when you do get your hands on a ripe one, it will help maintain that perfect ripeness for longer. 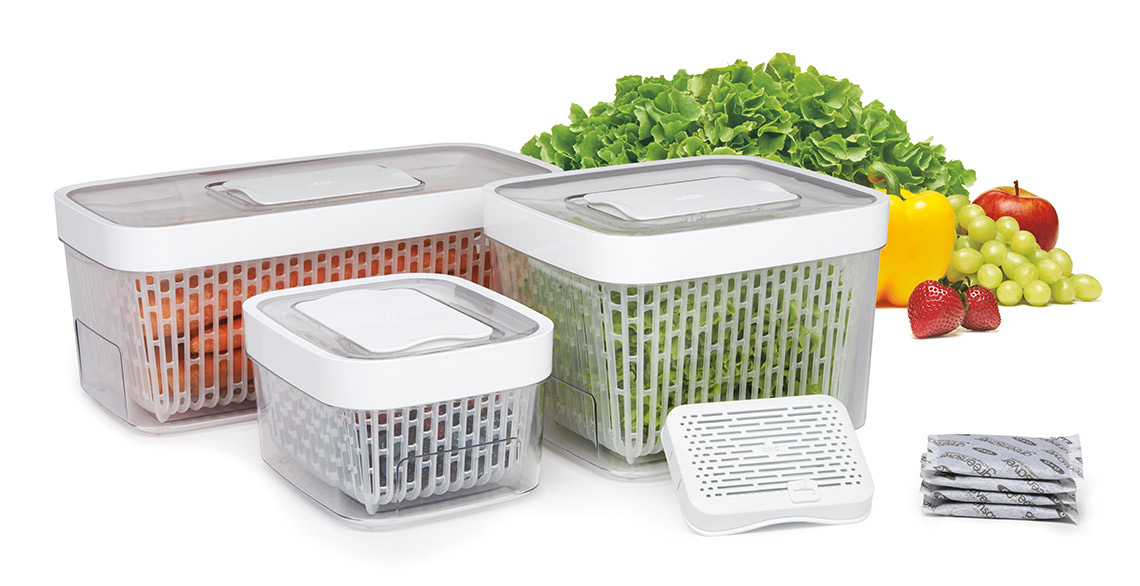 Commit every single day with @OXO